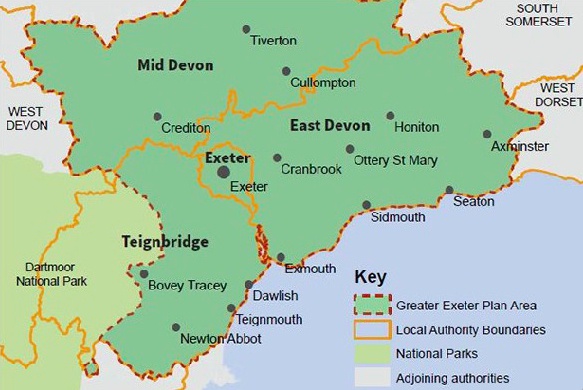 An indoor concert arena with a capacity for 20,000 people could be built in the Exeter area

It is difficult to pronounce and even harder to initially comprehend or care about, but the Greater Exeter Strategic Plan will affect where you live, work, shop, enjoy leisure and get around.

The Greater Exeter Strategic Plan, known as the GESP, is the major strategic blueprint for the area around Exeter.

Mid Devon, East Devon, Teignbridge and Exeter City Council, in partnership with Devon County Council, are teaming up to create the GESP.

This formal statutory document will provide the overall spatial strategy and level of housing, and creation of jobs and employment land to be provided up to 2040.

Where is the Greater Exeter area?

What is the Greater Exeter Strategic Plan trying to achieve?

By working together across local authority boundaries we are seeking to develop a plan which responds to how people live in the area. The purpose of preparing the Greater Exeter Strategic Plan is to:

What is the Greater Exeter Strategic Plan for?

The Greater Exeter Strategic Plan will be a new formal statutory document, providing the overall spatial strategy and level of housing and employment land to be provided in the period to 2040. When adopted, it will sit above Local Plans for each area which will continue to be prepared to consider local level issues. Neighbourhood Plans will also be promoted so communities can continue to be empowered to make the detailed planning decisions for the benefit of their area.

To improve transport around Exeter, the strategy proposals include:

What about a new sports and concert venue I heard mentioned?

An indoor sports stadium and concert arena with a capacity for 20,000 people could be built in the Greater Exeter area.

Cllr Christophers said: “There needs to be benefits to the area of the increased level of housing that will be provided.The Greater Exeter Strategic Plan cannot just be a document about housing, but also about infrastructure and more highlights for the area. The proviso of the document is that the GESP area will become a rural city, but it absolutely needs the infrastructure in place, and that has to include all the things that you would expect to find in the city.

“We are seeing what we can provide around an indoor sports facility and a concert arena and to see if it is deliverable to have one in the area.

We are looking at the evidence of need for a sport zone and a concert venue that could host 10-20,000 in the area. We would need to make sure it stacks up financially, but it is welcomed and we think there is a need for it."