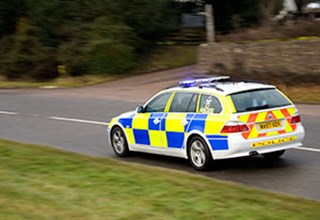 He was arrested in St Leonards last night

A 29-year-old man's been arrested on suspicion of possessing explosive devices.

Officers and the Royal Navy's Bomb Disposal Team carried out a search of the property and took a number of items as evidence.

“We are really grateful for the patience shown by local residents last night. Of course public safety was, and remains, our primary concern.

"During the early stages of our response, whilst we were content with regard to the safety of others in the nearby flats, and of course our own staff who were present, we were not in a position to share much information about the nature of the investigation as a person needed to be arrested and key evidence secured.”

A 29-year-old man has been arrested on suspicion of making or possessing an explosive substance under Section 4 of the Explosive Act 1883.
He's in custody and will be interviewed later today.

Supt Lawler continued “This investigation is currently being led by local detectives from Exeter CID. During the course of the day there will be an increased policing presence to maintain a small cordon on the area, and search team and forensic staff will be conducting their work during the course of today.
"I would like to reassure residents and nearby businesses that the incident and investigation is currently contained. A man is in custody and will be interviewed later today. Whilst we appreciate that this will have caused some alarm to those directly affected last night, we would like to thank residents for their continued support and understanding as we progress our thorough and proactive investigations and searches today. Given this is a live investigation, we would ask that everyone resists the temptation to speculate, particularly on social media, and we will issue further factual information and updates when it is appropriate to do so.”