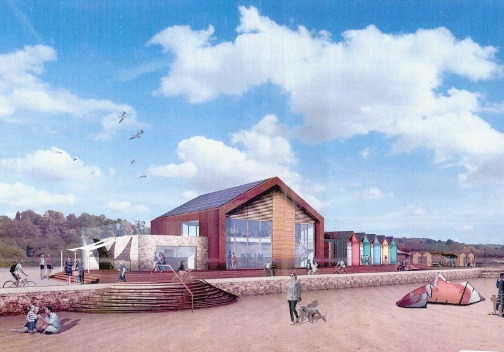 It will be part of Exmouth's redevelopment

Grenadier hope to turn part of Exmouth seafront into a brand-new watersports facility for the community and planning permission was granted earlier this year.

They have now been joined in the development by a new restaurant, run by Mr Caines, and East Devon District Council have said that it shows that Exmouth is ‘truly going places’ and the people can be reassured about the seafront regeneration.

Cllr Philip Skinner, Chairman of the Exmouth Regeneration Board and the economy portfolio holder for East Devon District Council, said: “It’s marvellous news that Grenadier and the watersports centre development now has the renowned chef Michael Caines signed up.

“The council is delighted that our ongoing road and car park development will enable this to happen next year and we look forward to the opening of Michael’s restaurant alongside the new water sports facility. Exmouth is truly going places and the people of the town can now be reassured that the seafront regeneration is underway.”

Work is expected to begin on site in late Summer 2019 after East Devon District Council has completed the diversion of Queens Drive, and the restaurant is expected to open Summer 2020.

Mr Caines has said that what will be on offer will be very different to the fine dining experience available at nearby Lympstone Manor.

Mr Caines, who grew up in Exeter, said: “The waterfront development will play a pivotal role in the future and regeneration of Exmouth and I’m really excited to be a part of something that celebrates all that this wonderful coastline has to offer.

“We’ll be using local ingredients to showcase the great variety of high-quality food and drink that this area has right on its doorstep with a menu that offers something for everyone.

“Tourism and hospitality are together a pinnacle of the local economy and job market and we’ll be working with a local academy and college to bring young people through on an apprenticeship scheme to offer them the opportunity to work in the catering and hospitality industry.

“I’m looking forward to working alongside Edge Watersports to create a vibrant place for local people and visitors to enjoy the activities and food on offer or to just come and relax while they soak up the scenery.”

The restaurant will include a range of offers to suit all tastes, from a casual dining restaurant complete with an upstairs terrace, to a dog-friendly cafe offering a lighter menu and serving homemade ice-creams, local coffee and healthy takeaway snacks.

It will use quality locally sourced produce, including fish from the Exmouth docks and meat from local farms offering something for everyone, a spokesman for Grenadier said.

Peter Quincey, Director of Grenadier, added: “We are thrilled to have Michael and his team on board supporting the new water sports centre on Exmouth seafront. The restaurant will offer somewhere for people to visit all year round – whether they’re dog walkers, cyclists, scenery seekers or have been out enjoying water sports activities and want somewhere to relax, refresh and refuel.”

But the decision of East Devon District Council’s cabinet to commence realignment of Queen’s Drive, even though there was a risk that the council will have incurred the £1.2m costs of developing the road and car park without Grenadier committing to build the watersports centre, has been criticised.

Mr Quincey said that Grenadier were still committed to the project, but the final signatures on the planning permission had not been signed off by them, meaning that if the council didn’t go ahead and forward-fund the works, which started in November, they would not have begun until at least January and would have added to the cost of the project.

Save Exmouth Seafront campaigners said that the decision of the cabinet had raised a whole number of questions.

“Why is a new road being built behind the proposed Watersports centre before the developer has fully signed up to the project? Why is EDDC paying for the new road? Why isn’t the developer paying upfront for the new road instead of EDDC? Is there a contingency plan in place if the present developer does not proceed? What does EDDC hope to gain by building this road now?

“Yet again SES has to ask, what are the motives that are driving EDDC’s decision making processes over the redevelopment of Queen’s Drive?