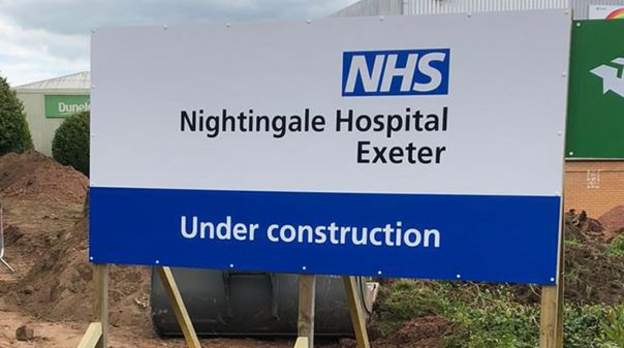 Retrospective plans to build the Exeter Nightingale Hospital on the site of the former Homebase store at Sowton have been submitted.

The new hospital, which has five wards each with 24 beds, was initially designed to cope with a surge of covid-19 cases, but with the number of infections in the south west remaining low, it's now being used for other patients and particularly for cancer testing. The £23m hospital has been given a new injection of cash to help to clear the backlog of seriously ill people caused by the pandemic.

But while some forms of development, including ‘the erection of a hospital building’ do not need  a planning application, permitted development rights do not apply if the proposed works involve development within five metres of the boundary of other buildings. That means the Nightingale needs formal permission.

The Royal Devon & Exeter NHS Foundation Trust have now submitted a retrospective planning application for the temporary change of use of the site. In addition to the main hospital building, modular buildings are proposed around it to accommodate facilities such as reception, pharmacy, kitchen space, changing rooms, lockers and showers.

They've asked for permission to use the land as a hospital for two years and expect about 200 staff will work there during the day and approximately 130 staff at night. The application states: “The proposed works are considered sustainable development. It seeks to enhance existing vital hospital services to the wider population of the south west of England, providing hospital space and large scale critical care to assist with the outbreak of covid-19.

“It should be considered that this proposal can deliver a great public benefit and as such request that the Local Planning Authority support his application. The proposals are also compliant with both national and local planning policy and should be considered favourably.”

Exeter City Council planners will determine at a later date whether to grant planning permission.