No emergency cash for Northcott 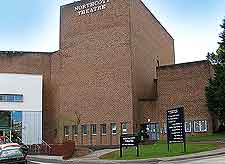 Exeter theatre is too financially stable

As many theatres and arts venues thank the Arts Council for a stash of emergency cash - including £800,000 going to Plymouth's Theatre Royal and £75,000 for Exeter Phoenix - it's different up on the Exeter University campus where the city's Northcott Theatre is based.

The Northcott's application for help has been turned down, even though it's already lost around £2 million in revenues and cancelled 200 performances because of the pandemic. The theatre is now likely to start the consultancy process required before making redundancies. Half of the staff at the theatre could lose their jobs.

The Arts Council fund is separate from the government's announcement about funding for the creative industries made at the weekend.

In a statement on its website, Daniel Buckroyd, the Northcott's artistic director and chief executive says: "Exeter’s flagship theatre has been 90% reliant on earned income for its survival ever since Arts Council England removed the majority of the venue’s core funding in 2010, which is a much higher figure than most comparable-sized theatres in other UK cities.

The Northcott team has worked incredibly hard over the last decade to re-build a stable financial position. However, the legacy of that reliance on earned income – which in normal times is seen as a real strength – has left the Northcott particularly vulnerable to the covid-19 crisis."

"Although the HMRC Furlough Scheme has helped us weather the early months of this crisis, in common with many UK theatres we’re now heading into a much more difficult period. Ensuring the survival of the charity through this challenging time means that we’re going to have to make some tough decisions about the shape and size of the organisation going forward. Whilst the recent announcement of Government investment in the Culture, Heritage and Arts sectors points to the possibility of support at some point in the future, without clarity about eligibility for this and a detailed timetable for the re-opening of theatres, we are left with no option but to start the first stage of consultations with staff about the probability of over 50% redundancies."

The theatre is hoping that the current closure is just "an interval," but it is clear the situation is critical.