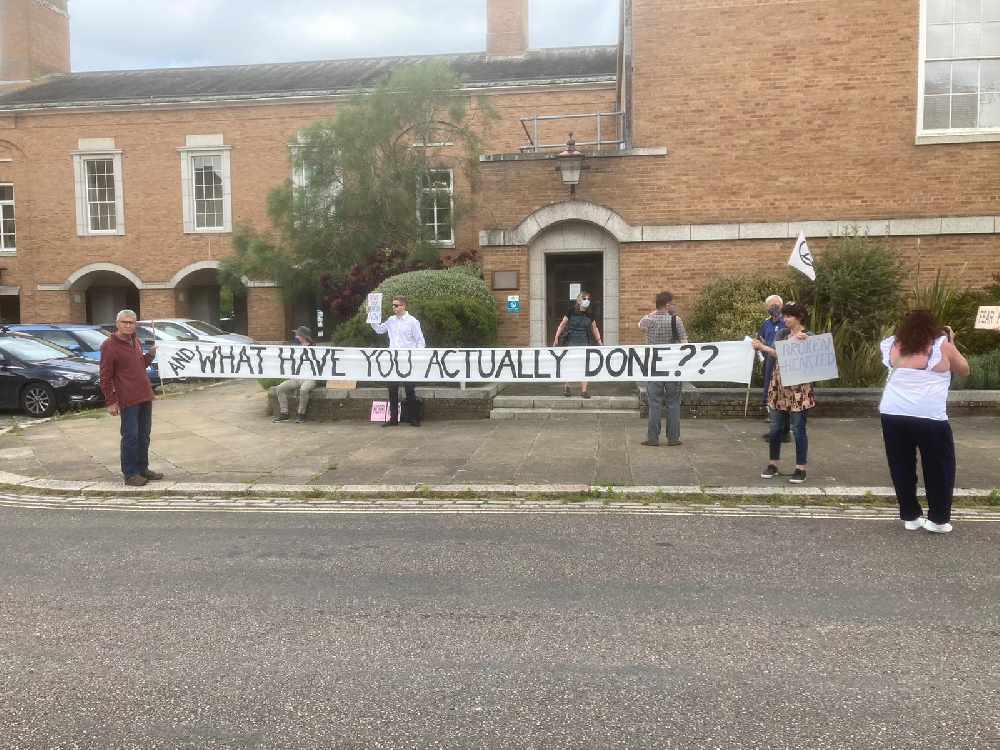 It's all hot air

Protesters gathered outside County Hall on Wednesday to call for Devon County Council to do more to tackle climate change.

The group of 13 people held banners and sounded an air raid emergency warning siren to demonstrate against what they claim is a lack of action in the past two years since a climate emergency was declared by the council.

Questions were also raised by the group inside the cabinet meeting, calling on the council to announce a new 2030 deadline for carbon neutrality, and asking what practical measures have been taken to deal with the emergency.

Cllr Andrea Davis, cabinet member for climate change, said she was mindful of the need to help Devon reduce its emissions as fast as possible and while it was not in the gift of Devon County Council to unilaterally decide what the Devon Carbon Plan should say, more than half of the responses favoured a county-wide, net-zero target of 2030.

Marilyn Spurr asked: “It is now two years since Devon County Council declared a climate emergency. This has been sufficient time to engage in consultations, make new appointments, so please give some indication of what practical measures have been taken to deal with this emergency or any that will be implemented in what remains of 2021?”

Maurice Spurway added: “Because a net zero target by 2050 only gives us a 50:50 chance of keeping below 1.5 degrees of warming, it is great news that preliminary results from February’s consultation on the Devon Carbon Plan indicate that 2030 is the preferred target. Will Devon County Council announce this new 2030 deadline as soon as possible, in order to bring Devon more in line with most of the deadlines of other district councils in the county?”

In response, Cllr Davis said that the Devon Carbon Plan consultation revealed an appetite for early progress towards net-zero but there is acceptance that achieving net-zero itself will be challenging.

She added that the councils recognises: "there are practical issues with achieving net-zero ahead of the national timetable (2050) for the whole county as many sources of carbon emissions in Devon are influenced by national policy. Our approach is to work with the government to reduce emissions quickly and show that if we work together with communities we can bring the net-zero date forward, hence the current county-wide target set by the partnership is ‘2050 at the latest’.”

Actions that Devon County Council has taken, she said, included:

By the end of the financial year, Cllr Davis added that Devon expects to have:

Caroline Snow also asked what steps Devon County Council will take to engage with developers and government to ensure all new homes in Devon are fitted with low carbon heating using currently available technology such as heat pumps that will immediately begin saving householders money and eliminate both carbon and methane emissions currently released through natural gas?

In response, Cllr Davis said: “It is expected that, in time as new technologies become available, government policy will require new homes to switch to lower carbon heating, with this requirement being tied to planning permission granted for new homes. To do so requires both the policy and technology to be in place.”

Cllr John Hart, leader of the council, added: “We have been discussing this whole concept and we can talk and help but they don’t always take it up. But in time, they are going to have to do something, and we will keep trying to persuade developers to do the right thing.”