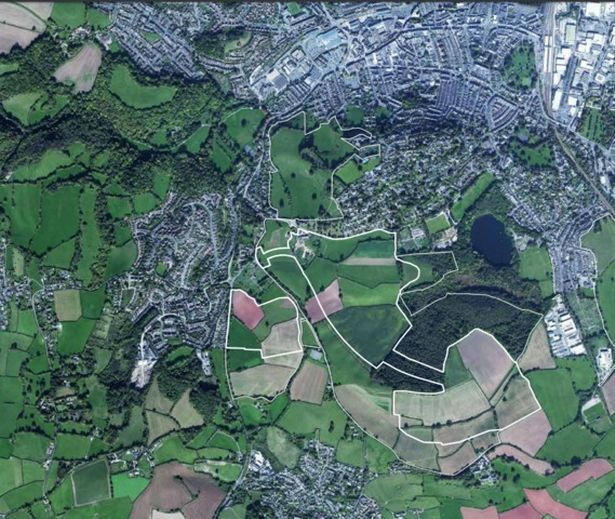 Woolborough Barton fields to be built on

Controversial plans for more than 1,000 new homes on rolling green hills on the edge of Newton Abbot have been allowed by a government inspector.

A scheme by a company called PCL Planning’s on behalf of the Rew family has been granted planning permission.

As well as the 1,210 new homes, the Wolborough Barton development includes a new primary school, employment land, community facilities, including a day nursery and a health centre, a local shopping centre, play area, allotments and a multi-use games area, as well as a link road connecting the A380 and the A381.

Full planning permission to convert the Wolborough Barton farm into a boutique hotel, restaurant and bar, has also been granted.

It follows an appeal to the Secretary of State submitted after Teignbridge District Council rejected it and an alternative on the grounds of insufficient information on the effect on the South Hams special area of conservation, the later delivery of the link road, and inadequate protection for nearby Wolborough Fen.

But planning inspector Frances Mahoney said that there were no identified harms that should stand in the way of planning permission being granted.

A spokesman for Teignbridge District Council said: “As an authority, we will now work with the developers to ensure that all conditions and obligations associated with the planning permission are fulfilled. We recognise that the planning inspector’s decision will disappoint the many people who opposed the application.”

More than 5,500 people signing a petition against the development and the Newton Says No Group, who fought against the plans, subsequently won three seats in last May’s district council elections.

It adds: “I consider in so a far as my conclusions are relevant to the recommendation within this Report, that the above measures of mitigation would be sufficient to ensure that the proposed development would not, beyond scientific doubt, have an adverse effect on the integrity of the South Hams SAC, nor would it result in a diminishing of the quality and importance of the SSSI as an ecological habitat.

“The provision of two care homes would respond to the needs of people as they reach different stages of their lives providing appropriate accommodation options and the provision of a youth centre, local shops, community facilities and primary school could be seen to just mitigate for the needs of future residents of the development.

“It has been concluded that the appeal site is in a location accessible to services and facilities described as highly sustainable. The encouragement of cycling, walking, implementation of the Travel Plan, along with the provision of the new circular bus route would provide options for other modes of transport other than the car.

“The proposed highway improvements, whilst being mitigating measures for the impact of the proposed development, would benefit the wider population in respect of improving highway safety.”

Full planning permission for the Wolborough Barton hotel proposals have been granted, while the 1,210 homes scheme and associated infrastructure has been granted in outline.