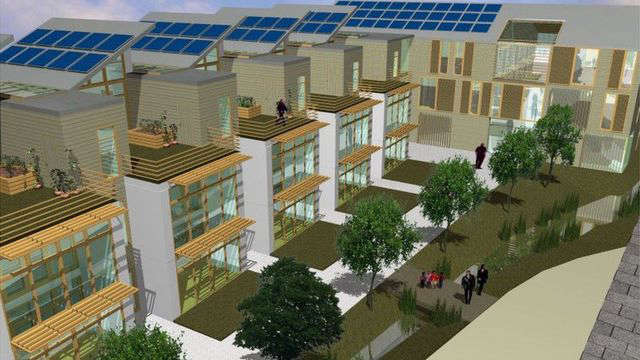 Plans to redevelop the former Dairy Crest site in Totnes for affordable housing and work space have been dashed after South Hams Council told directors of the scheme they had run out of time.

In 2016 Atmos Totnes, run by the Totnes Community Development Society (TCDS), submitted draft plans under a Community Right to Build Order for 99 homes including 62 “truly affordable houses” and 37 ring-fenced homes for older people.

It followed a local referendum in which more than 85 per cent of those voting answered 'yes' to whether planning permission should be granted.

TCDS received nearly £200,000 from the government's Community Housing Fund for "pre-development work" towards the new development.

But the Atmos site was sold in January to Essex industrial company Fastglobe for £1.35 million. At the time TCDS said they had been “gazumped”.

South Hams District Council has now written to both the new owners of the former Dairy Crest site in Totnes, Fastglobe, and the Totnes Community Development Society, to tell them that the Community Right to Build Order approved in 2017 has now expired.

The decision means that the proposed development, cannot now go-ahead without a planning application.

TCDS said they were shocked by the latest move.

In a statement they said: “We were surprised to receive a letter from South Hams District Council’s solicitor at 5pm yesterday [Monday] telling us that due to a legal challenge by the site's current owners, Fastglobe (Mastics) Ltd, they had concluded that the Made order, which was approved by SHDC in April 2017 following the referendum of the previous year, has expired.”

South Hams District Council says the planning order stated the permitted development should begin within three years of the date of the order being approved or the the order would expire.  This meant that a physical start on site was required before midnight on 29 February 2020.

But the community group said: “SHDC granted TCDS an extension in February 2020 in writing and we have been proceeding with our actions to re-secure the site for the scheme the community voted for, based on this. This extension was reconfirmed in a meeting with SHDC Officers in June 2021.

“The community of Totnes voted overwhelmingly in the historic 2016 referendum for the Atmos project to proceed, a groundbreaking scheme they had designed to meet their needs.

“Given the housing emergency the town - and indeed Devon and Cornwall - currently face -TCDS remains determined to pursue every possible avenue to getting Atmos built.”

TCDS hoped that submitting a 'reserve matters' application for appearance, landscaping, layout and scale, would stop the order from expiring.  But South Hams District Council says this is not the case.

Council leader Cllr Judy Pearce, said: “To date no physical start on site has taken place.  It is a real shame that this site has not come forward as a community development site as was intended, and sadly this is beyond the council’s control.

“Community Right to Build Orders are outside of the normal planning process and in this respect an order is very different to a planning application.  A Community Development Order is approved by a referendum and not by a planning committee.

“The expectation for the site in the adopted joint local plan still supports a mixed use development on the site, including sensitive design, respect for the setting of heritage assets and habitat enhancement and address any constraints such as flooding or contamination.”

South Hams District Council said it appreciated the strength of feeling around  and sought internal and external legal advice before confirming that the order has now expired.