Travellers to be moved from Paignton seafront 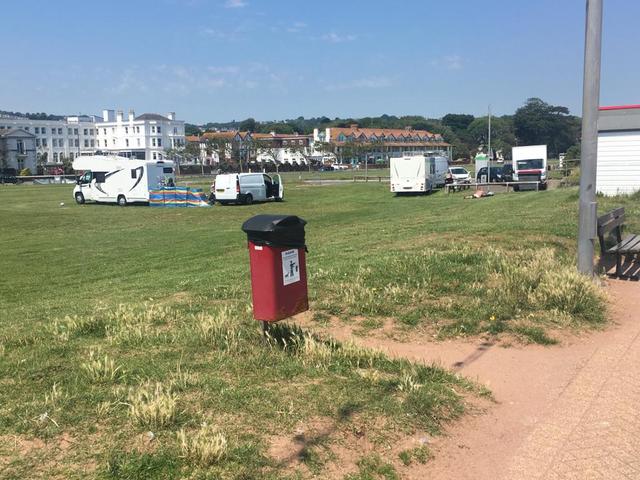 Torbay Council is taking legal action to evict a group of travellers from the seafront at Paignton Green. The gathering of vehicles and caravans is the second to be told to leave council-owned land in recent days in the area.

The local authority has carried out a clean-up operation at White Rock playing fields in Paignton after a group of travellers moved on.

Meanwhile another group of vehicles was reported at a car park in Clennon Valley in Paignton, near Torbay Leisure Centre and the Velopark cycling centre. A court application by the council for possession of Paignton Green was completed on Wednesday.

It was due to be submitted by Thursday and if the order is granted it would legally require the group to leave after more than a week on the council-owned seafront land. A separate group has moved on to land at Decoy Country Park in Newton Abbot.

Torbay Council has been looking for space to create a temporary stopping site for travellers, which would give the authorities more powers to stop unauthorised encampments. A meeting in February heard that three sites were investigated and ruled out but the search was ongoing.

Cllr Karen Kennedy, who had been involved in putting forward sites, said she had hoped a temporary stop-off place would be in place by April. The Conservative councillor for Churston with Galmpton said a site would ensure travellers’ rights were protected and residents and tourists would be free from interference.

Christine Carter, the council’s Cabinet Member for Corporate and Community Services, said in a statement on Wednesday: “A court application for possession relating to the travellers on Paignton Green is being completed and will be submitted either later today or first thing on Thursday morning.  “With regards to the clear-up after travellers departed White Rock playing fields, I can confirm that the clear up is nearly complete. We are continuing to proactively look for a temporary stopping site.”

What we will do

We can only take action if an encampment is on our land. We have no legal powers over privately owned land. For an illegal encampment on our land we will:

This will be done as soon as possible (dependant on day/time of arrival) by appropriate officers and they will find out how long the groups are hoping to stay and why they are here.

Day 2 to 7 – Assess any legal needs of the travellers

We advise partner agencies of the encampment and request the attendance of health visitors and where appropriate, the education welfare officers to make an assessment. These partners endeavour to respond within three working days of a request, subject to their availability. The outcome of these assessments will subsequently determine the appropriate course of action to be taken by us.

Before taking any action to evict an unauthorised encampment, we have an obligation to carry out welfare assessments of the unauthorised campers. We must consider whether these enquiries have revealed circumstances which warrant further examination or lead to the conclusion that the eviction should be postponed.

Other considerations in managing such an encampment will include one of toleration, relevant case law, the Humans Rights Act and the best interest of the child which are mandated as a primary consideration.

We liaise with agencies including the Police, Health service and other departments who have an interest in the land to determine the most appropriate course of action. This includes the location and nature of the land to which the unauthorised encampment is situated, any impact on the settled community; the needs of those present on site, in particular the presence of any children; any health and welfare needs, the size of the encampment and whether actual anti-social behaviour or criminality has been associated with it.

The Government guidance requires us to exercise some tolerance to such encampments and make decisions based on all available information.

If the decision is made to seek possession of the land, we generally use Part 55 of the Civil Procedure Rules (“proceedings”). In doing so, we obtain a hearing date from the Court and are required to give 48 hours notice to the occupants of the land between service of proceedings and the Court hearing date.

Where there are threats of assault, actual damage or associated anti-social behaviour by those occupying the land, or the land occupied is of a particularly sensitive nature, it may be possible for us to ask the Court to use their general powers of case management and shorten the required 48 hour required notice period. Where this is appropriate, we could obtain possession of the land on the same date that the proceedings are issued. However, it is important to note that this does not generally reduce the time period significantly.

If we fail to follow its statutory and procedural obligations, this may result in an application being refused and delay any subsequent possession being granted.

We will obtain the Possession Order and serve on the Unauthorised Encampment.

If the unauthorised encampment remains we will return to Court to issue a Warrant of Possession.