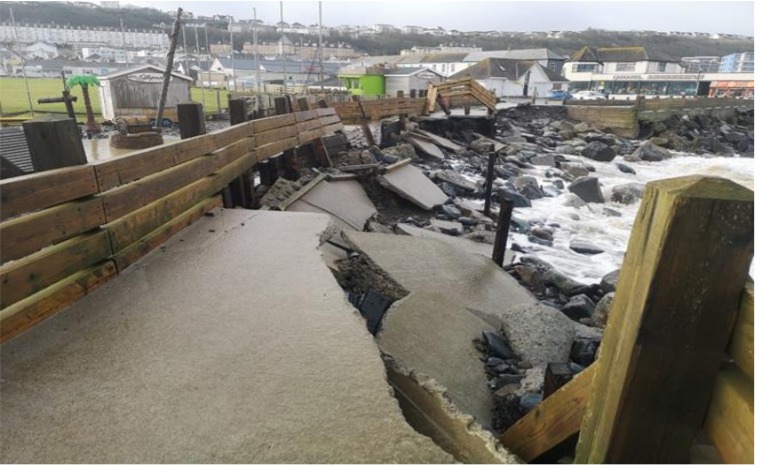 Rock armour is set to be sent from a car park in Bideford to Westward Ho!

Torridge District Council is being recommended to approve a scheme to ensure safe access by transporting rocks from the Clarence Wharf car park in Bideford to the slipway.

The report of planning and economy manager Sean Kearney says: “The provision of safe access to the beach is necessary for a number of user groups and an important part of our ongoing management and maintenance of this blue flag facility. It is also essential for the ranger and blue light services in the event of an emergency situation. Complaints have been received over the last few years that at certain times and tides, access to the beach for disabled or pushchair users has not been possible.

“The deterioration has accelerated since the named storms in 2017 and 2018 when considerable damage was sustained. In March this year the spring tides caused further loss of material locally, necessitating input from both TDC and the Environment Agency with intervention and recovery works.”

The report added: “The rock armour available locally is compatible with the material already in place on the beach at Westward Ho! and being surplus and readily available can be transported to site with minimal lead times.

The project is heavily tidal and weather dependent, and subject to full council approval, the intention is to progress with the work in the shortest time possible in the middle part of July when the tides are at their slackest.

When the work take place, access to the beach will require careful management, the report says, with no regular access to the beach from the slipway during this period, and arrangements will be put in hand to provide temporary access across the ridge for the Emergency Services and appropriate signage to alert the public to the alternative points of access to the beach.

Cllr Nick Laws added: “Sometimes what appears to be a simple job proves to be quite the reverse, putting an extension onto the Westward Ho! slipway to enable safe access to the beach is the perfect example, requiring the gathering of much information on wave action and the effect of gales in this the most vulnerable of sites must have required much research.”

Recommending that full council adopt the measures required, the report adds: “The works of extension to the slipway at Westward Ho! is necessary for the safe access onto the beach for both the public and emergency services. The works are required to be completed at the earliest opportunity ahead of the remaining 2020 season and to afford additional scour protection to the immediate area ahead of the autumn.”