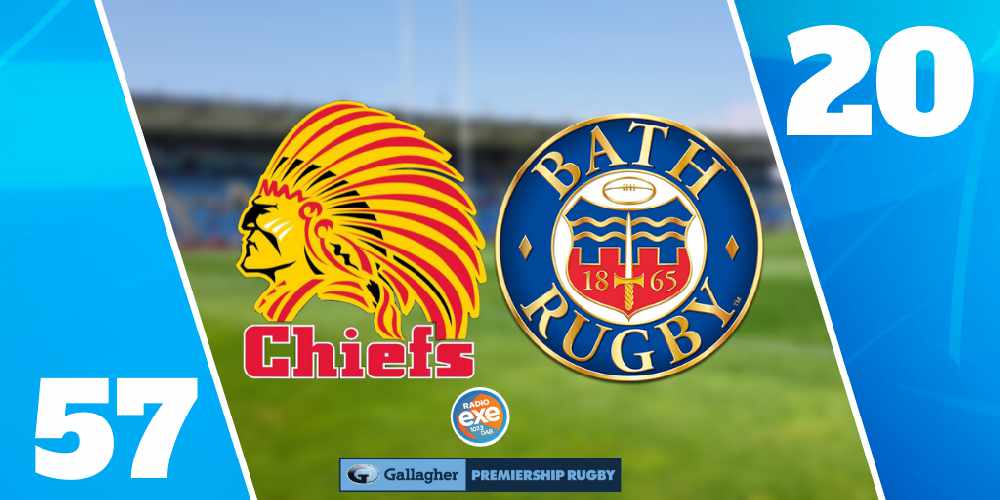 Having lost against Harlequins last weekend, Exeter bounced back emphatically with a convincing win against west country rivals Bath this afternoon that not only secures them a bonus point - but also lifts them above Sale to regain top spot in the Premiership.

Exeter have now scored an incredible 16 tries in their last two home games. A big statement from the 2017 Premiership winners.

Exeter Chiefs director of rugby Rob Baxter made a few changes from last time out. Harry Williams and Jonny Hill came into the starting 15. Jack Nowell, who last played in January because of an ankle injury, was named on the bench.

The hosts flew out the blocks and started the game brightly – and less than 15 minutes in, they scored two tries.

The first was scored by Tom O’Flaherty. Nic White produced a delightful looping pass over two Bath defenders for the speedy winger - who touched down in the corner.

Bath scored a penalty against the run of play soon after, however, Exeter continued to dominate as Woodburn scored a second try for the hosts. Dave Ewers broke Bath’s line before setting free Tom Hendrickson. The centre then played a good pass to Olly Woodburn who scored his first try of the season under the posts.

Unfortunately for Bath, it went from bad to worse. McNally received a yellow card for a high tackle on Elvis Taione. With the man advantage, Chiefs wrapped up the bonus point before the break thanks to a close range try from Jannes Kirstein.

With the wind now behind them in the second half, it didn’t take long for the former Premiership champions to take advantage.

Within just three minutes, Simmonds scored his second try of the afternoon. The number eight burst through Bath’s line of defence to score under the posts. His brother Joe kicked the extras.

The visitors did score twice in the 50th minute and 55th minute, having eventually breaching a stubborn Chiefs defence, but their celebrations were short lived.

Elvis Taione was soon in on the act - the 36-year-old powered his way over the line following non-stop pressure on Bath’s 5 metre line.

England international Jack Nowell was introduced to the pitch as a substitute for the first-time since he picked up his ankle injury in January. However, the Cornishmen turned into a spectator and watched Bath score their third try of the afternoon.

Exeter finished the afternoon on a high with two tries in the final ten minutes. Woodburn and Jack Maunder with the scores. Substitute Gareth Steenson brought up the half century with the conversion.