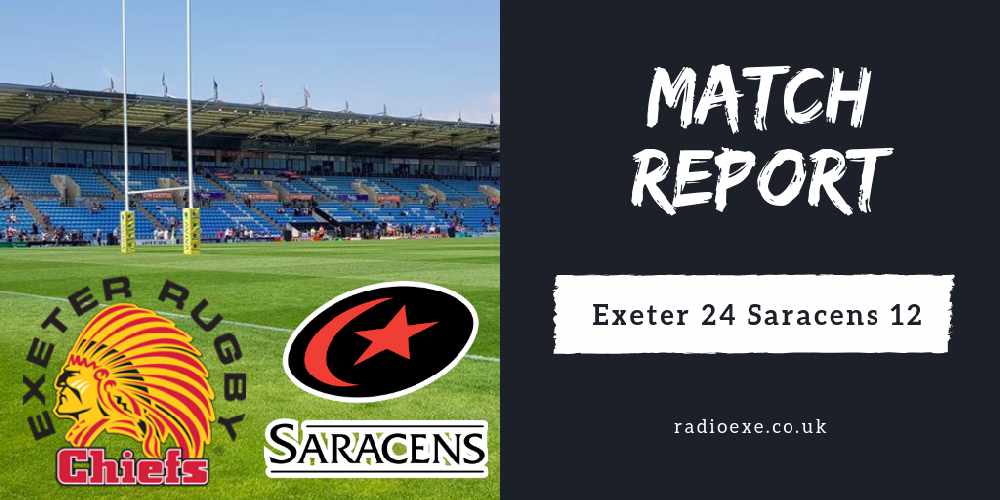 Joe Simmonds, making his Premiership debut for Exeter, is man of the match, as Chiefs go seven points clear at the top of the table.

The two top teams in English rugby collided at a sold-out Sandy Park on Sunday - and one of them is no longer in the top two!

The Chiefs made seven changes to the side that beat Northampton in the dying minutes last weekend. England centre Henry Slade returned, whilst young fly-half Joe Simmonds was given his first Premiership start in place of Gareth Steenson.

Within just two minutes, Simmonds stamped his authority on the game. With the wind in his face, he calmly kicked a penalty over the posts.

The Chiefs dominated, injecting pressure on the Saracens defence from the start. A scintillating run from Simmonds, gliding his way past three tackles, gained 10 meters. Shortly after, with a penalty advantage, Exeter opted to kick at goal. Simmonds finished the move he started by scoring another three points.  Exeter played with urgency and made few mistakes.

Capitalising on every opportunity when Exeter were awarded another penalty, this time for a deliberate knock on, they opted for the three points. And the penalty kicks soon stacked up, they lead 9-0; all scored by Joe Simmonds.

Unexpectedly, Saracens breached Exeter’s defence to score under the posts and convert. But within five minutes Phil Dollman ran over in the corner to score for the champions in a deft move from Slade, moving between through the fingers of Simmonds and down for five points. From the tightest of angles, Simmonds pulled his kick just wide. But all Exeter’s good work was undone in the dying embers of the first half. Conceding a penalty, the visitors powered their way over the line from a driving lineout, but missed the conversion to bring the half-time score to Exeter 14 Saracens 12

Then came the mistakes. A succession of knock-ons by Exeter, followed by a lost line out in their own 22, nearly resulted in a score for Sarries. But Exeter’s defence stood strong and managed to turn the ball over.

The champions continued to work the ball up field through the forwards. Earning a scrum in Sarries 22, they once more won a penalty – Simmonds kicked for goal and scored a further three points.

With 10 minutes to play, the Chiefs really turned the screw. Setting camp deep inside Saracens 22, the home side won a scrum just 5 meters out – which Sarries illegally disturbed. Penalty try awarded.

The 12 thousand fans at Sandy Park applauded a fantastic performance as man of the match player Joe Simmonds left the field with Gareth Steenson taking his place.

Players put bodies on the line to stop Sarries breaking through as the clock ticked down. The Chiefs defence kept them out and clinch a well-deserved, vitally important, win. Exeter’s lead at the top of the Premiership extends to seven points with just six games remaining, as Wasps move into second place with their win over London Irish.