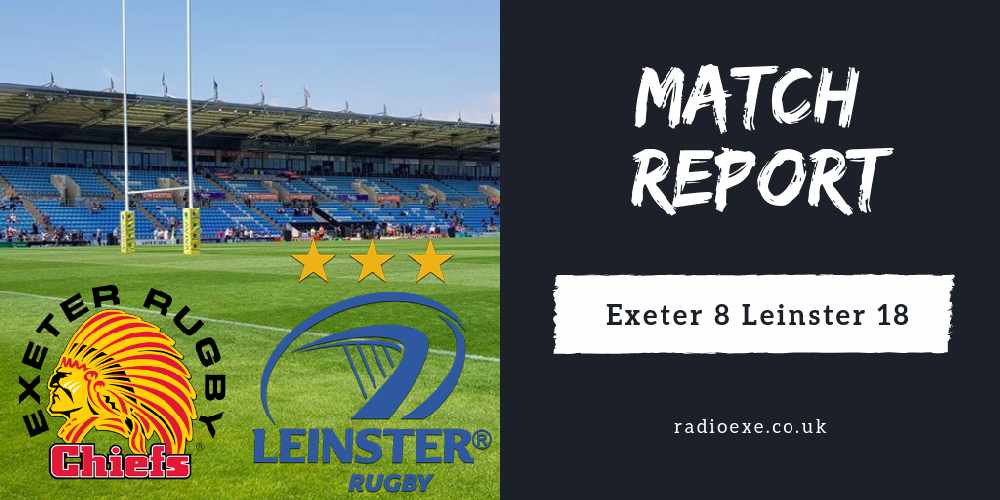 Before kick-off, this highly anticipated game was posed for a good encounter. The Chiefs flying high, pumped full of confidence after an emphatic win over west county rivals Bath last week, were looking for their tenth successive victory.

However, Leinster have been just as good. The Irish side grabbed two bonus point wins against Montpellier and Glasgow in Pool 3 to set up a fascinating first leg match against Rob Baxter’s Men.

The last time these two teams met in the same competition was 2012, Leinster were overwhelmingly favourites and came out on top. However, Exeter have come a long way since, with the Aviva Premiership trophy under their belt and a revamped squad, the West country team posed a real threat. Not just to Leinster, but all teams in Europe.

The Chiefs made just two changes from the side that beat Bath, England international Henry Slade and Jonny Hill replaced Sam Hill and Sam Skinner.

Straight from kick off, Lenister stamped their authority in the game putting the Chiefs under mounted pressure. And within just 5 minutes, Leinster touched down in the corner. But eyes around Sandy Park were firmly glued to the big screen as the match referee requested the TMO (television match official). After two minutes of angst, no try was awarded. James Short making the try saving tackle.

The ever-reliable Jonny Sexton had the chance to put Leinster in front with a penalty kick just beyond half way, but the swirling wind around Sandy Park denied his attempt. With the weather conditions effecting kicking dramatically, Leinster continued to assault the Chiefs line through the forwards. And the visitors thought they crossed for the second time – TMO was needed once again. No try.

It was inevitable, the try was coming. And it did. As the rain started to fall, Leinster raised their game even further. And finally, the Chiefs defence was breached. A cross field kick found the arms of Jonny Sexton who scored the first try of the game. The Conversion attempt was held up in the wind and fell short.

Exeter responded well, despite being second best, they were awarded a penalty with Gareth Steenson supplying the goods. To the annoyance of the home spectators, Exeter suffered another setback with Leinster kicking a penalty of their own.

The Champions of English rugby eventually found their rhythm. The Tomahawk Chop resonated around Sandy Park as Exeter attacked Leister’s line just 5 meters out. Big hits flying in left, right and centre as the Chiefs tried to power their way through, it ended in a collapsed maul coming to nothing. With 40 minutes played, James Short made a surging run forward but failed to go all the way. Exeter trailed at the break.

In a blink of an eye, momentum changed rapidly. Straight out of the blocks, Exeter attacked down the right flank in numbers. Jack Nowell was just two steps away from crossing the line but taken down by the neck in his tracks. Chants around the ground suggested the home fans wanted a penalty try or red card as replays were shown around the stadium. However, the referee only produced the yellow.

With the man advantage, Rob Baxter’s men took full advantage. Fantastic link up play between Olly Woodburn and James Short created a 2 on 1 situation, releasing at just the right time, Woodburn passed the ball to Short who scored in the corner. Not for the first time, the windy conditions around Sandy Park prevented Steenson securing maximum points. 8-8.

Showing good composure, Sexton put Leinster ahead with a penalty kick to give his side a narrow lead. That was followed by another try for the visitors. Adding salt to the wound, Sexton added the extras. With less than ten minute to play, Exeter trailed by 10 and showed no sign of a comeback.

A disappointing result for the Chiefs. Full time: Exeter 8 Leinster 18.

The return match is in Dublin next weekend, in which Leinster will undoubtedly start as favourites.