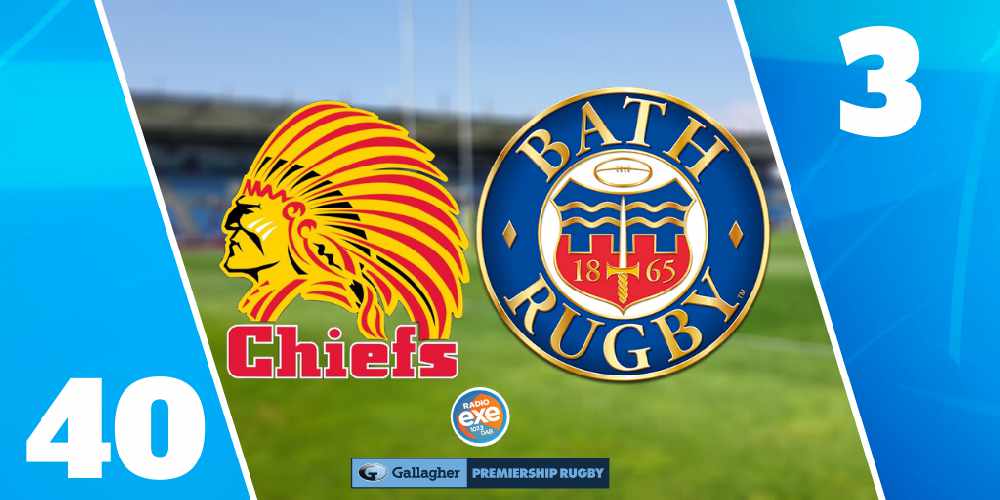 Exeter Chiefs’ first game back at Sandy Park since becoming domestic and European champions ends in victory as they inflicted Bath’s second successive defeat of the new season.

Rob Baxter’s side, still without a number of their international stars, regain top spot in the Premiership table after comfortably beating their west country rivals 40-3 in an entertaining, one-sided, encounter under the floodlights.

Chiefs’ Sam Simmonds attracted all the attention last week, deservedly so with a scintillating hat-trick of tries, and his fine form continued this evening.

Exeter’s star number eight, overlooked by Eddie Jones for England selection, was on the scoresheet once more inside just 10 minutes. Exeter opted for a scrum just five metres out and the 26-year-old was at the back of it to dot the ball down over the line – his brother Joe slotted the conversion.

The double champions were applying all the pressure in the first half and they soon built on their lead 10 minutes later. The unstoppable Sam Simmonds was at the back of another trademark driving maul; Joe added the extras from a tight angle.

Chiefs struck again moment later, this time however, the score was produced with a superb piece of open play through Tom O’Flaherty – and it’s definitely an early try of the season contender. The winger has obviously been watching Exeter City – who’ve scored 20 goals this month – to set up Exeter’s fourth try. Joe Simmonds picked him out with a cross field kick, instead of catching it, O’Flaherty volleyed the ball from halfway to Bath’s try line. The speedy winger won the foot race to dot the ball down in the corner, Simmonds again slotted the extras.

Although firmly on the back foot, Bath did manage to get on the scoreboard thanks to a Presland penalty Infront of the posts - but Exeter convincingly led 21-3 at the break.

Exeter went hunting for the bonus point in a lower intensity second half. Although Bath were made to endure a torrid opening period, they looked much improved after the break and made the European champions work hard for the fourth try – which did, however, eventually come on the hour mark.

The hosts set camp inside Bath’s 22 metre line before trying their luck from short range with a number of scrums, Bath couldn’t stop them, and as a result of continuous deliberate collapses the referee awarded Exeter a penalty try.

The bonus point win was in the bag – but Chiefs wanted more. With just over ten minutes to play, substitute Sam Hidalgo-Clyne added a fifth after being at the back of yet another driving maul. The Scottish scrumhalf might have been the name on the scoresheet – but the hard work was done by the forwards from close range.

In the dying embers of the contest, Exeter rounded off a superb performance with a sixth try, scored by substitute Ian Whitten. The centre touched down in the corner after classy work from the backs. Simmonds missed his final conversion, although in the grand scheme of things, it didn’t matter as Exeter comfortably won 40-3.