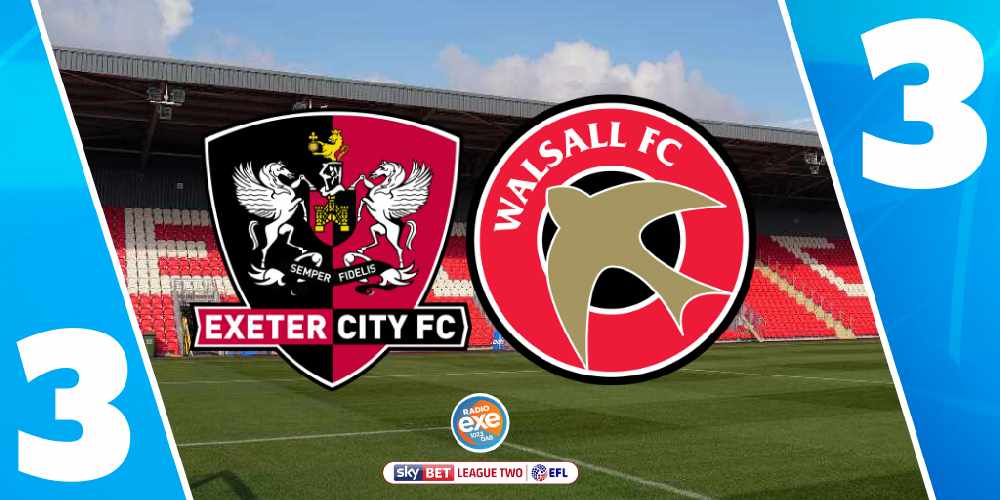 Exeter City came from 3-0 down to salvage a draw with Walsall in a League Two Christmas cracker at St James Park.

They looked to be heading for a crushing defeat after conceding a trio of early goals, but fought back thanks to a double from Ryan Bowman and Lee Martin’s equaliser.

The visitors dominated the opening stages and got their reward in the 13th minute. Dan Scarr turned the ball back across the face of goal and it cannoned off the foot of Grecians defender Pierce Sweeney into his own net.

Not long later Darrell Clarke’s men doubled their advantage, thanks mainly to a slip from City defender Aaron Martin. It left striker Caolan Lavery, formerly of Plymouth Argyle, through on goal, and he finished smartly past Jonny Maxted.

Things then got bad to worse for Matt Taylor’s men when captain Dean Moxey, playing his 300th game for his hometown club, was forced off through injury, replaced by Tom Parkes.

To add insult to that injury, the Saddlers soon added a third. A pinpoint cross from the left from winger Wes McDonald found Josh Gordon, who snuck in at the far post and fired a header into the far corner.

A stunned St James Park was being treated to a flurry of goals, though not the way the vast majority were hoping for. However, the home side did get on the scoresheet just after the half-hour mark. Archie Collins sent in a first-time cross that was headed onto the post, before striker Ryan Bowman steered home the rebound.

Buoyed by that goal, City soon had another thanks to an excellent through ball by Randell Williams to Bowman, who fired past visiting ‘keeper Liam Roberts into his far corner.

And the former Motherwell was then close to a hat-trick before half-time, only for his close-range effort to be well blocked.

The Grecians kept up the pressure after the interval chasing an unlikely equaliser, and they were close to one when Williams’ teasing free-kick was tipped around the post at the last moment by Roberts.

Despite the best efforts of Walsall, who switched to a back five at half-time, Lee Martin’s deflected effort just after the hour completed a sensational comeback for the hosts.

City then pressed for a winner but, following a rare Walsall second-half attack, Alfie Bates corner had to be turned away by Maxted on the line after nearly going straight in.

Moments later in what was turning out to be a frantic finale, Bowman saw his shot well saved by Roberts after a smart low cross by the lively Williams, denying the 28-year-old a hat-trick.

And in the last act of the match, Jack Sparkes' cross was met by Williams, but his header went narrowly wide of the post, meaning Exeter had to settle for a remarkable point.